The Lithuanian Geological Survey under the Ministry of Environment takes part in the international seismological projects. These projects provide opportunity to perform deep Earth studies at large scale. The information obtained during the studies might be used for seismological, engineering and other kind of applications. 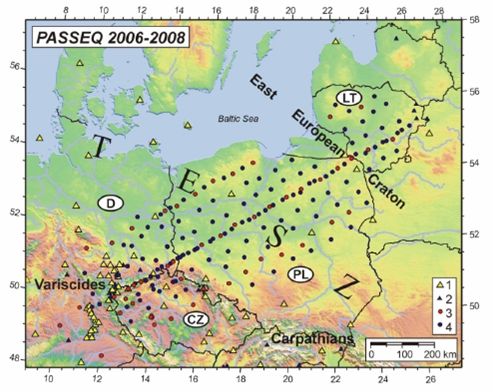 The Lithuanian Geological Survey during 2006-2008 took part in the international passive seismic experiment PASSEQ 2006 – 2008. The main aim of the project was to study the lithosphere-asthenosphere system around the Trans-European Suture Zone (TESZ). The Tornquist-Teisseyre Zone (TTZ) in the central part of the TESZ is well expressed tectonic boundary between the young Palaeozoic West Europe and the Precambrian East European Craton. The study of the deep structure of the zone is important for understanding the tectonic processes of the past in Europe. 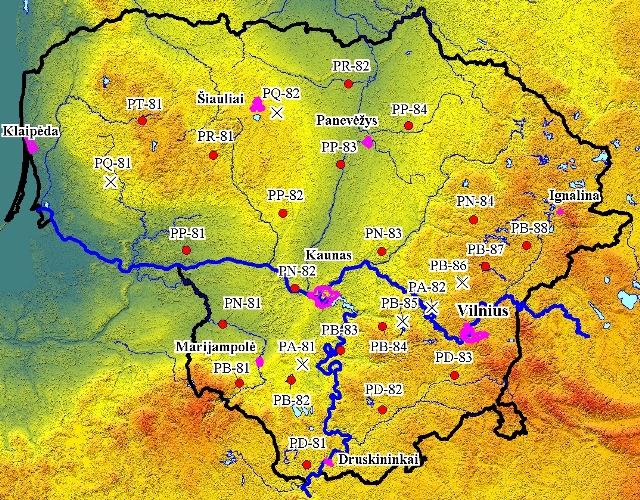 The EUROBRIDGE'95 is the deep seismic sounding project in the Baltic Sea, Lithuania, Belarus and Ukraine (Fig. 3). The EUROBRIDGE project aimed to study processes of collision and accretion of the paleocontinent (Fenoskandia, Volgo-Uralia and Sarmatia) 1,85-1,80 Ga ago, and to study deep structure of the East European Craton and the geological-tectonic complexes in the Baltic Shield and Ukraine Shield. The core of the EUROBRIDGE was 1500 km long wide angle reflection and refraction profile, which continued from the eastern coast of Sweden throughout the Baltic Sea, Lithuania and Belarus to Ukraine (Yliniemi et al., 2001).

In 1994 the first part of the EUROBRIDGE profile was carried from Västervik (Sweden) to Šventoji (Lithuania). In 1995 the EUROBRIDGE'95 profile of 280 km length stretching  NW-SE direction along the territory of Lithuania was carried out. During the project the TNT devices of 1 tone have heen blasted at the shot-points located every 30 km along the profile. And only in one shot-point near Gotland there was used TNT device of 3 tones. Altogether along the profile there were installed seismic stations for recording generated seismic waves. In 1997 the EUROBRIDGE profile was continued to the territory of Ukraine.
The data collected during the EUROBRIDGE project was analyzed and combined with the data of studies of magnetic, gravimetric, electrical conductivity and heat-flow. The results revealed the major tectonic structures and blocks in the region, and their age and processes which resulted the geological-tectonic structures (Bogdavona et al., 1996).

The POLONAISE (POlish Lithospheric ONsets - An International Seismic Experiment) project was an international deep seismic sounding experiment which aimed to study the Trans-European Suture Zone (TESZ) which separates the Precambrian East European Craton and the West European Platform which has formed during Caledonian and Variscan orogenies (Fig. 4). The POLONAISE seismic experiment was carries out in Poland, Germany and Lithuania in 1997. There were completed five wide angle reflection and refraction seismic profiles which continued around 2000 km in total. There were used 63 shot-points and about 600 seismic stations installed along the profiles at safe distances. During the experiments there was obtained large data set which was used for tomography inversion, ray-tracing and other research methods. The data also enabled to model the 3D structures of the underground. 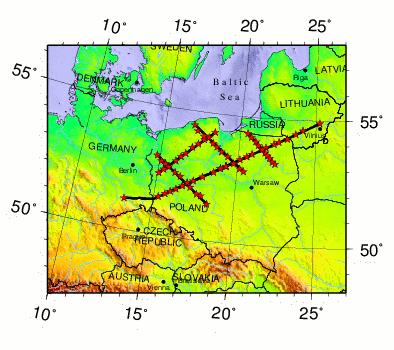 Fig. 4.  The profiles of the deep seismic sounding project POLONAISE. The shot-points marked as red stars (map compilled by Institute of Seismology University of Helsinki).